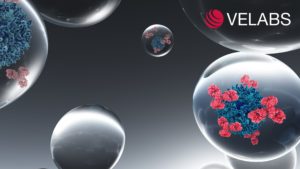 Heidelberg, Germany, January 07, 2019 — Velabs Therapeutics, specializing in the fast generation of functional therapeutic antibodies, today announced that it has entered into a collaboration agreement with BioMed X Innovation Center, Heidelberg. The collaboration will capitalize on Velabs’ microfluidics-based technology in the field of T-cell screening.

The BioMed X Innovation Center is a new collaboration model at the interface between academia and industry. BioMed X is using the Velabs platform to support the research team of John Lindner to explore new concepts for rapid identification of auto-antigens in autoimmune diseases. The research team, sponsored by Janssen Research & Development, LLC, will use high-throughput microfluidic screening approaches to couple T-cell receptor specificity with auto-antigens.

Velabs Therapeutics, a recent startup company of the European Molecular Biology Laboratory (EMBL), is a pioneer in microfluidic technology for functional screening of antibodies and single immune cells. The high-throughput screening platform allows for testing millions of correctly paired fully natural IgGs from humans and mice for therapeutic effects, rather than just for binding. Results are obtained in only a fraction of the time required by other technologies. The company offers customized screening services for users worldwide. Besides carrying out service projects, Velabs is currently also establishing its own proprietary pipeline of therapeutic antibody candidates for further joint development with pharma partners.

“We are excited by this new cooperation with one of BioMed X’s top research teams.”, says Christoph Antz, Managing Director of Velabs. “The company’s capacities in fast screening of single cells and functional antibodies will strongly support a superior performance of BioMed X’s research team”, adds Christoph Merten, scientific founder and CSO of Velabs.

“In order to address the central challenge of screening and characterizing different immune cells at large scale, the research team chose Velabs’ technology as the most suitable and promising microfluidic screening platform available”, says Christian Tidona, founder and Managing Director of BioMed X.

About Velabs Therapeutics
Velabs Therapeutics is a spin-out from Europe’s most prestigious life science research and instrumentation institute, the European Molecular Biology Laboratory (EMBL), standing at the forefront of microfluidics-based screening technology and applications world-wide.
The company’s droplet-based microfluidic screening technology aims at the fast generation of antibodies against target molecules presented on cellular membrane surfaces or as soluble protein. VELABS has pioneered the use of droplet microfluidics for the fast screening of correctly paired human antibodies that do not just bind to a drug target, but rather modulate its function.

About BioMed X
The BioMed X Innovation Center is an exciting new collaboration model at the interface between academia and industry. At the center, distinguished early career scientists recruited from all over the world jointly work on novel pre-clinical research projects in the fields of biomedicine, molecular biology, cell biology, diagnostics and consumer care. These interdisciplinary project teams conduct groundbreaking biomedical research in an open innovation lab facility at the Technology Park on the campus of the University of Heidelberg, Germany. They are working under the guidance of experienced mentors from academia and industry while expanding their scientific network and receiving entrepreneurship and leadership training. Each team is typically sponsored by a corporate pharma partner of BioMed X. After a fully funded project term, successful projects are either internalized into the development pipeline of the respective pharma partner or transformed into an independent start-up company. BioMed X collaborates with pharma companies such as AbbVie, Boehringer Ingelheim, Janssen, Merck and Roche.