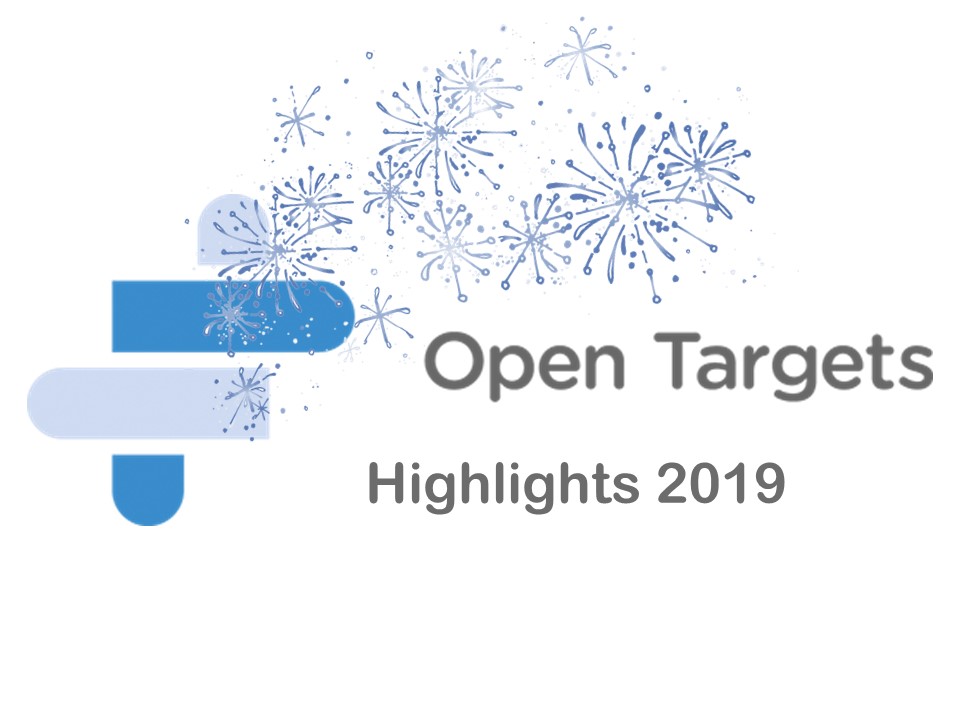 As the end of the calendar year is approaching, it’s a good time to look back and reflect on progress for Open Targets. This year marked the fifth anniversary of the partnership and has been a year of both consolidating its approach and seeing encouraging signs that its strategy is succeeding and its work is making an impact. We saw the first major publications coming from the experimental projects that were initiated early on in the consortium lifecycle, and there is more to come from the ongoing project pipelines. The Open Targets Platform is reaching a maturity that is attracting interest from many outside the consortium, and the Genetics Portal is gaining recognition as a robust approach to genetics data. Open Targets can look forward to further progress as new projects deliver next year, enhancing its portfolio.

Several high impact papers from Open Targets’ initial experimental projects were published this year. In oncology the first version of a resource was released to identify targets that can be inhibited to kill cancer cells in specific genotypic contexts based on genome-wide CRISPR gene knock-outs in 324 cancer cell lines. This project, Project Score, has now been incorporated into the Cancer Dependency Map. The same CRISPR gene editing data was also used to identify fusion genes that are essential to cancer cell growth, confirming the power of integration around the same cancer cell lines. The partnership can expect to see more applications of gene editing bearing fruit next year in its other therapy areas. In asthma, the first single cell analysis of healthy and diseased human lung cells was published representing an early marker of the exponential growth of data from single cell approaches. In immunology we saw the first publication on the integration of GWAS with functional genomics in specific immune cell types. Each of these papers represents a facet of Open Targets’ overall experimental strategy of using genetics, gene editing and high throughput characterisation of disease phenotypes. Further ahead the projects that were started as a result of the most recently completed project call will really enhance the partnership’s approach to oncology and immunity genetics.

On the informatics side there has been lots of activity. Open Targets published the latest paper on the Open Targets Platform early in the year. The Core Platform Team continues to work on new features for the platform and releases new data roughly every two months. Next year will see a substantially revised new look to the Platform based on updated technology, which has been tested over the course of multiple integration days. Open Targets will also continue to develop the underlying infrastructure to enable the partnership to offer more flexible tools. It’s important to remember that the Platform data is served by a network of activity in many groups particularly at the EMBL-EBI, who continue to improve their offerings year on year and enable Open Targets to be sustainable and current.

A good example of the type of integration that Open Targets can achieve by being embedded in the Hinxton campus is the Open Targets Genetics Portal. The Core Genetics and Platform team have continued to improve the Genetics Portal since its launch in 2018 to include cutting edge genetics analysis approaches including colocalization with expression QTLs. This work is enabled and made sustainable by the efforts of the GWAS Catalog group to establish a database of GWAS summary statistics, the EBI SPOT team to provide ontology terms particularly for UK Biobank and the eQTL Catalogue project to establish an eQTL repository and unified processing pipeline. Each of these resources plays an essential part in a virtual pipeline that enables Open Targets to realise its vision of consistently interpreting GWAS evidence in a growing and sustainable way.

A core part of Open Targets approach is the power of partnership. The Open Targets integration days continue to attract over 100 scientists from across the partners to discuss Open Targets science. This year Open Targets also worked with the EMBL-EBI industry programme to provide two workshops in areas that are of interest to Open targets. The Genetics Workshop in Boston was well received and contributed to the future directions of the Genetics Portal. A recent Target Safety Workshop held in Hinxton has seeded many ideas for representing target safety for target prioritisation within the Platform. We have also been engaging with like-minded projects in the early drug discovery space notably the Structural Genomics Consortium and the NIH Illuminating the Druggable Genome (IDG) program. The joint Open Targets-IDG meeting at Hinxton in November brought together these two initiatives and interested scientists, highlighting Open Targets to a wider audience.